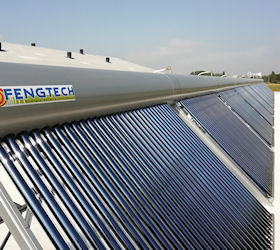 This spring we talked about a great European project that CCS was going to work on. The project on solar thermal installations focuses on systems that have been specially developed for the climate in North-West Europe. Now we are half a year further in the project and it is time for an update! After all, we have some great developments to discuss.

In the previous message, for example, we indicated that we were looking for test locations. Due to that message we received a lot of reactions, thank you for that! We hope to start next year at one of these locations. In France and England the project is going even faster. In France there is already an active test site with measuring equipment. This location has been collecting operational data for a month now, which is extremely important for the project! A similar test site is currently being built in England. The test sites are collecting data on, among other things, the temperature, flow rate and energy yield of the installations. With this information it is possible to make the solar thermal systems function even better.

In the Netherlands, we have been developing calculation models to determine the technical and financial feasibility of various locations. This went very well because of the large number of reactions we received! Now it is time for step two and once again we are looking for farmers who want to participate in this second round. We are looking for farmers with a smaller consumption (less than 20,000 m3 of natural gas per year). With these farmers, we want to start a second feasibility study with the tools we developed in the first round. If it turns out that solar thermal is suitable for your farm, you may also be eligible for European subsidy and the ISDE subsidy in this round.